What Lenders Need to Know About ‘Automatic’ PPP Forgiveness 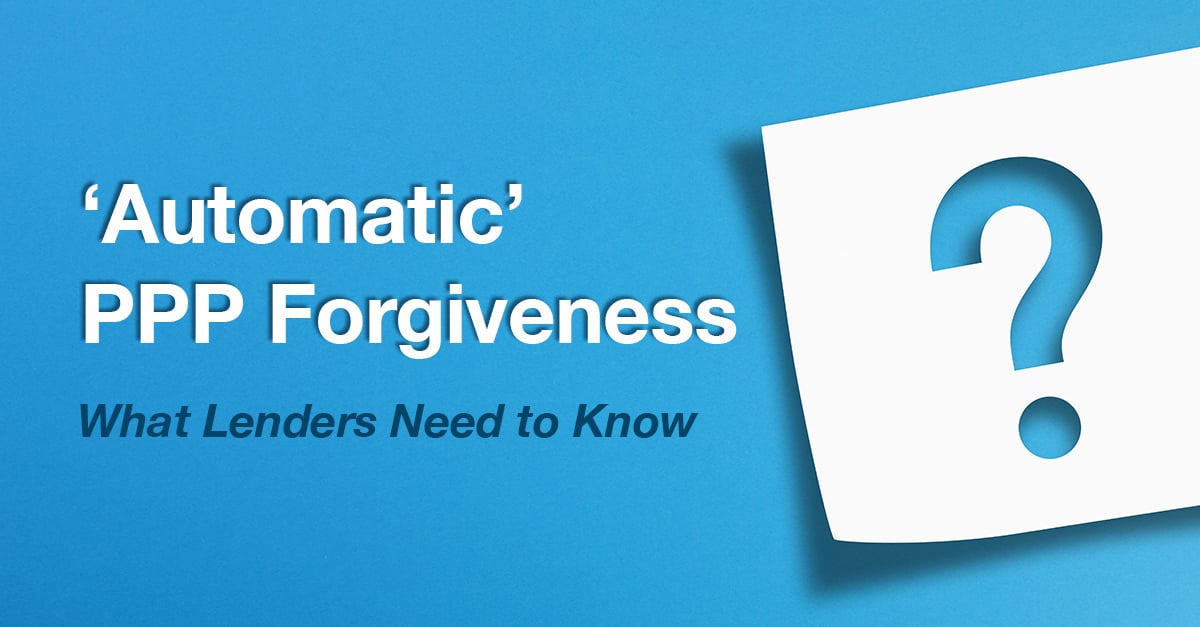 Just before the July 4 Congressional recess, Sen. Kevin Cramer (R-ND) worked with a small bipartisan group to introduce a bill that’s caused rumors to swirl in the weeks since.

Senate Bill S.4117, a bill “to provide automatic forgiveness for Paycheck Protection Program loans under $150,000, and for other purposes,” has left many banks and credit unions wondering what this means for them and their business customers.

While the thought of “automatic forgiveness” is certainly exciting, it’s important to be clear: no one is waving a magic wand and making these PPP loans disappear.

Here’s what the bill does do, however:

In fact, it makes PPP Forgiveness more complicated for banks and credit unions as it introduces a third potential forgiveness path for borrowers to take, along with the 3508 application and the 3508 EZ application.

For banks and credit unions, the process around automatic PPP forgiveness will be much the same as the other two processes they’re already more familiar with:

During PPP originations, many lenders were able to survive the onslaught of demand because their branches had been forced to close down due to the pandemic and they were therefore able to reallocate resources to the labor-intensive SBA-backed loans.

Months later, banks and credit unions are far from back to normal. Some are trying to pivot to business as usual and reopen branches; others are being forced to close back down as COVID-19 once again surges through our communities. In either case, while automatic forgiveness simplifies life for the borrower, it is clearly labor-intensive and will pull staff out of day-to-day operations for a lot of non-value added work, at a time when lenders can least afford it.

While “automatic forgiveness” might sound like a positive, it has potentially just made forgiveness far more difficult for lenders. Not only is there now a third path they need to account for, but the perception of ease that the moniker “automatic” gives off could possibly cause a crush in demand similar to what lenders experienced during PPP originations.

Further, a single-page application could sway borrowers to pay less care to their “automatic forgiveness” applications, leading to more errors or potential fraud. While the bill in question aims to move the risk associated with this off the lender and onto the borrower, banks and credit unions need to ask themselves what happens when a large percentage of these automatic applications end up needing to be audited by the SBA? Clearly, even “automatic forgiveness” requires meticulous documentation and an easy-to-access audit trail.

Luckily, the entirety of this process--along with all other types of PPP forgiveness--can be automated using the Numerated platform.

To learn more join one of our Weekly Q&A Sessions and Platform Demos, held on Tuesdays and Fridays respectively. To save your seat for an upcoming 30-min session, register here.