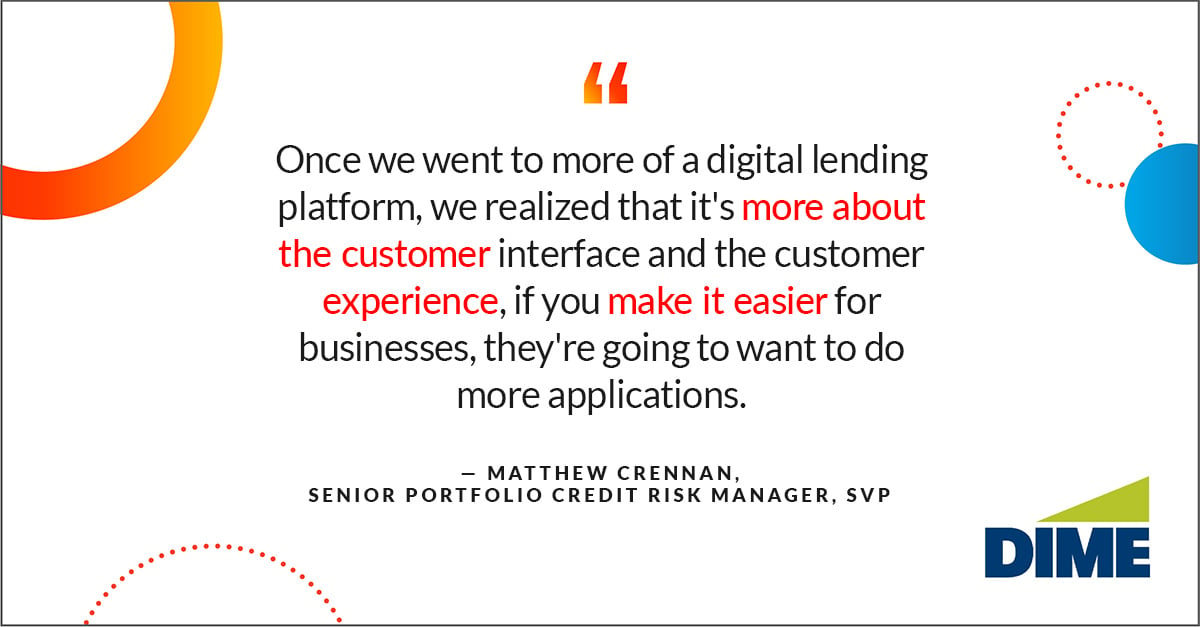 Dime Community Bank is a roughly $11.5B financial institution headquartered in Hauppauge, NY, with more than 800 employees staffing 60 locations throughout the region.

As a community institution, Dime is deeply committed to fostering financial success with the New York businesses they serve. Today, that means delivering experiences customers demand and meeting expectations that have evolved over the course of the pandemic.

The following quotes have been transcribed from our discussion with Dime Bank Sr. Vice President Matt Crennan at this year’s Acquired or Be Acquired conference by Bank Director. The quotes cover a range of important topics including customer’s changing expectations, the need for digital lending in business banking, and choosing a trusted partner to make their sales transformation a success.

Like many community banks, Dime’s digital lending journey began during the height of the Paycheck Protection Program. Without a loan origination system like Numerated in place, Dime SVP Matt Crennan explained, “my team got sucked into the work, the manual work that we had to do” during the first round of the program.

According to Matt, the manual labor involved in processing a PPP loan led to a “backlog” of loans, as funds were depleted during the first round of lending.

After conducting a post mortem, it was clear “we’re not doing that again,” Matt said. “And that’s what led us to Numerated.”

“It was all hands on deck for us and for the Numerated team,” Matt said, describing his team’s work between rounds of lending. “We stood up fairly quickly and seamlessly and we were ready for that second round of PPP. We processed 1500 applications in that second round. And we found that only five required any banker intervention.”

For Matt and his team, “that was incredibly eye opening, and … now we're saying, okay, clearly the experience went well.”

A part of the aha moment for Dime bank didn’t just come from what they saw in the data. As Matt explained, “we received similar feedback from customers; [of the loans process in round two] we ended up picking up 20 percent new customers that came to us from larger institutions and shared similar feedback that working with ‘the big four’ during PPP was a nightmare.

“So that for us PPP really became eye opening in that we could stand up a digital platform and we could drive customers to it—both in branch and online.”

On choosing a fintech partner for business banking

Dime Bank ended round one of PPP with a backlog of customers in need of relief, so getting round two right was critical. That meant choosing a fintech partner that could provide efficiency gains as well as an experience that would allow Dime to compete with any lender in the country.

“The process and technology we were using before Numerated was much more back-office focused,” Matt said. “That was my history previously, as I am building out the originations systems … how do we make the back-office more efficient?”

Today, after the eye-opening experience of PPP, Matt understands that back-office efficiency is just one part of the equation.

“Once we went to more of a digital lending platform, we realized that it's more about the customer interface and the customer experience,” Matt said. “If you make it easier for businesses, they're going to want to do more applications.

“And if you make it easier for your branches, they're going to want to do applications because branches want to sell. They don't want to be filling out paperwork, collecting documents, dealing with the back and forth of emails. That manual process was just too much of a difficult experience. There's too much friction in the process.”

As Matt tells it, “it really was in PPP that I saw this.

“Prior to PPP, I think I still had that back-office mentality. But once we started using Numerated in round two, I mean we did over 2000 self-serve apps on the platform with a team of like three people in my office. And no bankers had to put in any information for any customers, they just pretty much provided their customer the application and the customers input the info, and it was just great.

“Where you normally hear negative comments from customers like ‘this process takes too long, it's a problem,’ we were getting emails from customers saying this is the most smooth process that they have ever gone through.” Matt added, “I have customers that said, ‘Oh, we did our first round of PPP through Chase, but you guys have such a smoother process.’ So you can drive a lot more growth if customers like the process, than if they don't.”

After finding success during the second round of PPP and seeing their customers’ reaction to the Numerated platform, Dime has expanded their use of the LOS to the rest of their business banking portfolio.

Our focus is more on our retail brand and we use the platform as a way for our branch bankers to take your mobile applications. We haven't really taken very many micro-loans in the past, but we've done 300 loans in the last nine months since we launched our small business platform on Numerated, when previously we would be doing one a month because the process was so difficult.

[With Numerated] there are efficiency gains for both us and the customer, because you give the customer an experience that they're expecting and you are making it efficient for your bankers. So your bankers are focused on the sale, not collecting a bunch of documents or making sure they're checking every box that the applications are completed. With the back office, you get all the efficiencies because your data's already all been structured [with Numerated’s native data integrations] and the ability to automatically send out loan documents [is a big time-saver]. So whether it’s the back-office, the customer, or the banker, they all have a better experience.

As Matt explained, Dime is focused on trying “to play it into our branches because we already have a lot of these customers. With existing customers, they're easy targets, but [previously] we weren't giving them an ability to access capital online, and now we can.

“Our goal is to maintain our low cost of deposits, so these customers, while it might be a small loan, a lot of them may have larger deposits for us, and they're sticky deposits, so we like to use this as a defensive, as well as an offensive, measure.”

On marketing to small businesses as a (now) digital lender

Now that it’s so easy for Dime to work with businesses in their communities, Matt and his team are finding new ways to market to the small business owners within their branches’ footprint.

“We really found which verticals perform the best in areas of volume or economics. From there, we develop customer profiles,” Matt explained. “And so now what we're going to pilot in the coming weeks is a Salesforce campaign.

“We'll push out collateral to small businesses and provide the link to the platform that serves as a very cost effective way to do business development. Now, if they take advantage of the link they’ll be directed to a pure, self-serve experience. Great! If they don’t click that link,” Matt says,  “we can then deploy our branch personnel who are at our call center to follow up on the heels of a warm introduction. And because of the work that we did on the data side, we understand who that small business is and we can better explain why they should bank with us and help them understand that we have the tools that can make business banking incredibly convenient for them.”