While “digital transformation” might feel like a buzzword, the market forces demanding that banks adopt such a strategy are far from exaggerated. Digital transformation is the key to survival for traditional banking institutions, a fact that was highlighted dramatically in a recent report by Accenture.

The whitepaper titled, Caterpillars, Butterflies, and Unicorns: Does Digital Leadership In Banking Really Matter? outlines a research study conducted by Accenture that examines whether or not a bank's digital maturity—or how “digitally transformed” they are in comparison to traditional financial institutions—has anything to do with their market valuations and future financial outlooks.

To get to the bottom of the study’s central question, Accenture’s researchers determined digital maturity by looking at what banks said about themselves, what others said about the banks, and by Accenture's own judgement.

Taken together, Accenture’s researchers were able to grade more than 160 banks, across 20 countries, on their digital maturity. These banks were then separated into three categories—“Digital Focused,” “Digital Active,” and “The Rest”—based on their gradings.

The easiest way to understand the digital maturity of these three groups is by using Accenture’s own metaphor of a caterpillar morphing into a butterfly.

Having identified the digital maturity of each group, Accenture was then able to analyze the financial performance of these banks over a six-year period to assess the role of digital transformation.

Accenture’s researchers sought to determine if (1) Digital Focused and Digital Active banks have larger market valuations than The Rest, (2) if larger valuations were justified by increased returns on equity (ROE) or hyped by marketing and public relations, and (3) if ROE could be explained by a bank’s digital transformation efforts.

Three charts helped answer these questions and prove that digital transformation is a path toward success for today’s financial institutions.

Do investors actually care about a bank’s digital maturity, or are they equally set in their ways and only looking towards traditional markers of success? This is the crux of the question Accenture wanted to answer. Accomplishing this required looking at each groups’ average price-to-book ratios, and the results stand out in two distinct ways.

While Accenture admits this doesn’t mean it can say digital maturity is what caused higher valuations for Digital Focused and Digital Active banks, it can say with confidence that it is at least an explanatory factor. All-in-all, the story this chart tells us, is that investors have more confidence in banks that care about digital than they tend to in their more traditional counterparts. 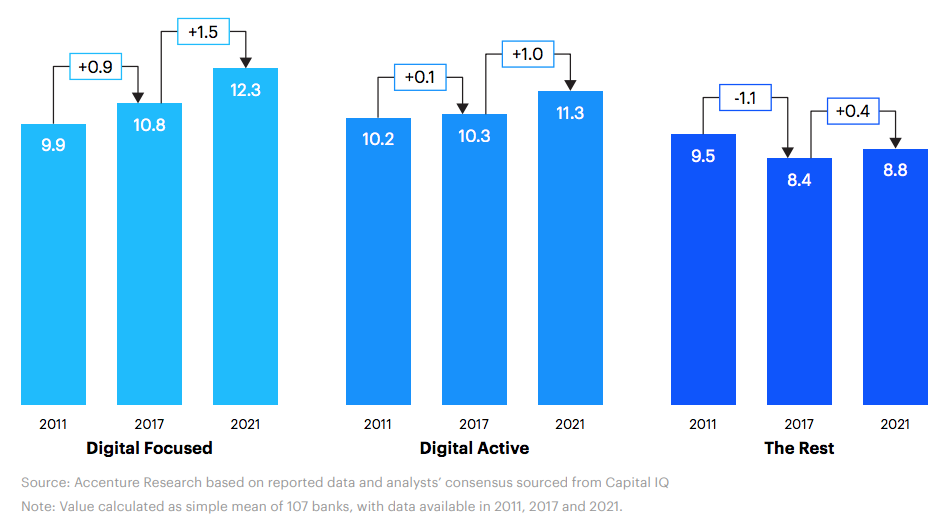 Since Accenture can’t tie digital maturity directly to higher market valuations, they needed to dig a bit deeper in their analysis. They wanted to know whether these valuations were actually justified by better economic performance, or if they were simply investors getting on the Digital Focused hype train. Determining this meant looking at banks’ ROE—do digitally mature banks tend to generate a better return on capital than The Rest?

Accenture’s analysts were able to determine that, while ROE between the three groups was similar in 2011, digitally mature banks have seen increases in profitability, while laggards have not. Furthermore, projections show that this gap is expected to widen and, although The Rest group is expected to see some growth in the next couple years, this traditional-banking group will remain less profitable than they were in 2011.

So digitally mature banks are both more profitable and more desirable investments than their traditional counterparts, but why?

Simply put, the investments digitally mature banks have made to upgrade their IT infrastructure and provide their customers with modern banking capabilities like real-time lending, have made these banks incredibly efficient. And it shows in Accenture’s analysis.

Digital Focused banks are deft at squeezing more equity out of every dollar of revenue, and their Digital Active counterparts are similarly efficient. But that’s not the only story here.

When we look at digitally mature banks’ efficiencies, in relation to their asset sizes, and in comparison to that of traditional banks, we start to see that banks that invest in digital transformation are also able to drive revenue primarily through net interest income, rather than relying on non-interest income.

This means digitally mature banks are better positioned to take on the new competition of alt lenders, megabanks, and the unicorn challenger banks that were born online and primarily want to compete by eliminating service charges and fees.

Accenture’s research does an excellent job of proving that digital transformation is more than just a buzzword—it’s a strategic imperative. But the global consultancy’s report also had one more nugget of important information tucked away, and that’s the fact that the banking industry is about to go from vulnerable to volatile.

According to their report, a whopping 33 percent of all revenue growth in the European banking sector has been won by financial institutions that didn’t exist prior to 2005. In the UK, the story is even more dire, with a full 10 percent of total revenue, and nearly 60 percent of revenue growth, going to new entrants in the space.

With branch closures reaching an all-time high in 2018, and mergers and acquisitions accelerating, consolidation of the US banking industry is happening rapidly and could soon lead to similar disruption as has been observed abroad. This has placed a tremendous amount of pressure on the CFOs and other bank executives who are squarely responsible for the financial health of their institutions.

Banks can no longer forgo or delay investments for the ways they’ve always done business, and bank CFOs need to be on the front lines sounding the alarm.

As Accenture’s researchers note: investors are “not [confident] that there is future value in the traditional bank business model.” The time for digital transformation is now. And Numerated can help.