What is the Paycheck Protection Program Loan Forgiveness Gap? 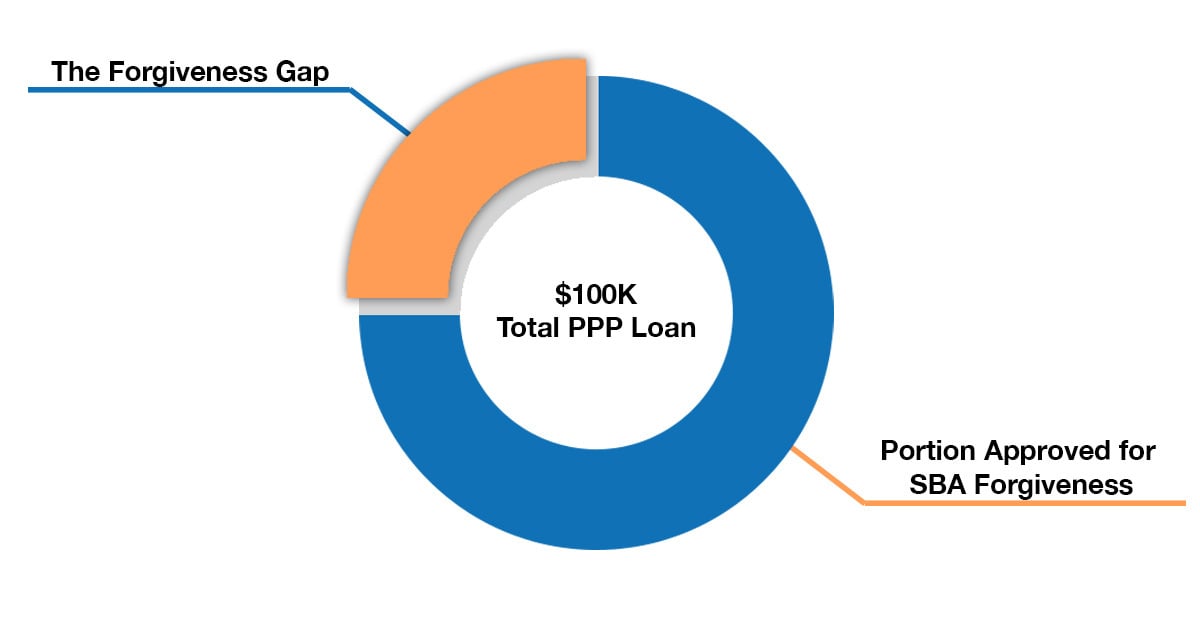 When Congress passed the Coronavirus Aid, Relief, and Economic Security (CARES) Act, the most notable part of that legislation was the Paycheck Protection Program.

Through the PPP, Congress appropriated nearly $670B to the SBA for disbursement to small businesses, through banks and credit unions, in an effort to save as many jobs as possible. The legislation allowed these financial institutions to extend SBA-guaranteed loans to borrowers, with the promise of upwards of 100 percent of those loans being forgiven, as long as they were used to maintain payroll and cover appropriate expenses such as rent and utilities, for example.

Now with the last of the funds being disbursed, banks and credit unions are preparing for the next part of the PPP equation: forgiveness.

As just noted, PPP loans only carry the potential of 100 percent forgiveness and many businesses will fall short of having the entirety of their loan forgiven for a number of reasons. For example, if a business uses more than 25 percent of their PPP loan on their mortgage then they can expect to see a reduction in the amount of forgiveness they’re approved for through the SBA.

This caveat in the legislation creates what we call “the PPP loan forgiveness gap.”

The PPP Loan Forgiveness Gap: What Is It and What Should Financial Institutions Expect?

So what happens with PPP loans that aren’t forgiven?

As we outlined in our Paycheck Protection Program Loan FAQ for Banks and Credit Unions:

In many circumstances a portion of a PPP loan—and, less frequently, the entirety of the PPP loan—will not qualify for forgiveness. In this event, any portion of the loan that is not forgiven will fall under the original terms of the loan:

Said differently, the forgiveness gap is the portion of the loan that the bank has not been approved to cancel and which the borrower has agreed to repay under the original terms of the loan.

As outlined by the SBA, it’s up to the borrower to initiate and apply for forgiveness. Further, the risk largely lies with the borrower in identifying and calculating the portion of the loan that is eligible to be canceled. Therefore, the biggest challenge and biggest opportunity for banks and credit unions here is making the process as easy as possible for the borrower.

Banks and credit unions have worked tirelessly to get American small businesses relief through the Paycheck Protection Program. But the mission is far from accomplished.

As financial institutions prepare for the next phase of forgiveness, they should expect much of the same from the SBA and Treasury: unclear guidance, rule reversals, issues with government technology, and challenging time tables.

Their business customers, coming off of an understandably stressful lending experience, will be under the same pressures but will be taking on even more risk with forgiveness. It’s incumbent upon the financial institution, then, to take as much of the stress out of this process as possible for their customers.

While some institutions have begun sending borrowers worksheets on forgiveness, creating an exceptional customer experience will require more than a pamphlet.

First and foremost, banks and credit unions need to make the forgiveness process a self-service one; meaning borrowers should be able to handle all of their responsibilities without the need of coming down to a branch or hoping on the phone with a banker. However, banks also need to keep in mind borrowers that will naturally need banker assistance. With that in mind, the ability to provide omnichannel support is also a must.

Secondly, banks should be helping their borrowers calculate the portions of their loans that are eligible for forgiveness. As guidance is released from SBA and Treasury, it’s financial institutions that will be looked to as subject matter experts and any assistance that can be provided in this regard will be seen as a true value add for the business owner.

Finally, financial institutions need to be prepared for influxes in demand. PPP lending was a mad dash with a starting line and a limited amount of funds—and that meant banks and credit unions could scale up personnel to deal with a surge in demand, or prepare otherwise.

Forgiveness, however, will be less predictable as it’s based on when loans were approved, when funds were disbursed, and when the covered period begins and ends for the borrower. Further, in addition to the demand front-line bankers will be confronted with, customers confused or frustrated by the amount of forgiveness they receive will likely seek assistance through customer service channels, which could potentially overwhelm teams given the complex nature of each forgiveness application.

Because of this, it’s incredibly difficult to predict when the surge in demand will happen or how it will hit, meaning financial institutions need to be prepared to scale very quickly and with almost no notice. These institutions, therefore, need to have systems and technology in place that can handle a surge in demand when they don’t have the physical bodies to accommodate.

Through the two rounds of PPP funding, we’re proud to have helped banks and credit unions deliver more than 170,000 loans to American businesses, or nearly 5 percent of the total program. We’re also proud to have empowered nearly 20,000 bankers, underwriters, and operations professionals, across more than 70 financial institutions, in PPP lending since the legislation was passed into law.

As we move to the forgiveness piece of the equation, we’ve focused on building unique features like calculators to help banks and borrowers solve for this PPP forgiveness gap and automate as much of this process as possible.

Banks and credit unions interested in learning how Numerated can help, can reach out to us directly or view our on-demand PPP loan forgiveness demo and webinar, here.