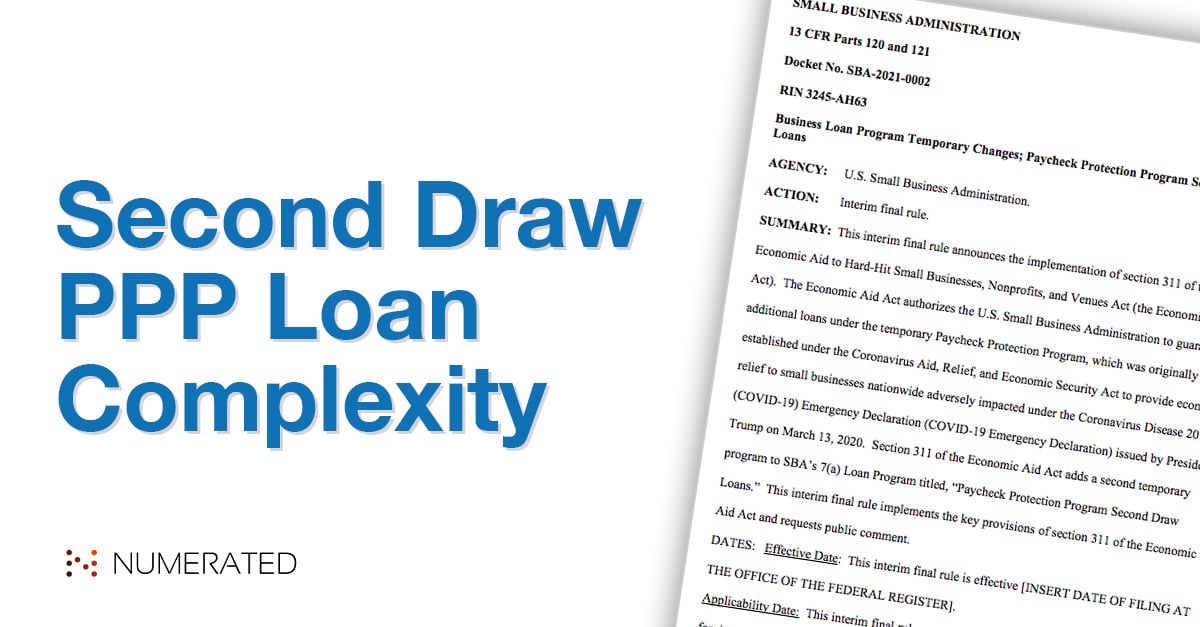 Jan. 6 marked the deadline for the Small Business Administration and Treasury Department to begin issuing guidance for the next round of the Paycheck Protection Program. With less than an hour to go before the 12am deadline, the Treasury did just that--releasing two Interim Final Rules covering amendments to the program and outlining the specifics of Second Draw loans.

While many hoped for a simple reopening, the reality is far more complex. The two IFRs combined, total a massive 124 pages of legalese that lenders will now be charged with digesting and implementing for their borrowers. To give an idea of just how dense the legislation is, a full 16 pages alone are dedicated to describing how to properly calculate a loan amount.

But it’s Second Draw loans where borrowers will feel the most pain. As the No. 1 Platform for PPP Originations and Forgiveness, we’re updating our solution based on the Treasury guidance to simplify Second Draw loans, remove complexity from the process, and provide borrowers with a far easier experience than they’d have applying manually.

With Second Draw loans, the program now feels more like navigating the tax code than filling out a loan application. Through it’s IFRs, the SBA and Treasury have established different regulations by industry, have provided different calculation methods borrowers can use to determine their loan amounts, and will require multiple types of documentation from borrowers throughout the process.

That’s a serious problem when you consider just how much demand will be driven by Second Draw loans in this next round. In November, the National Federation of Independent Businesses reported that more than 90 percent of America’s small businesses had spent all of their relief capital, with three out of every four said they’d consider a Second Draw loan when available.

Those numbers are consistent with what hundreds of lenders have told us over the course of recent Q&A sessions on the subject.

Given the complexity and demand of Second Draw loans, as well as the mad dash for relief funds that is expected when the program officially reopens, banks and credit unions have a logistical nightmare on their hands. The two options for lenders, then, are to either employ accounting professionals to answer the myriad questions you’ll be receiving from borrowers, or to utilize technology that can act like a TurboTax for PPP lending--technology like the Numerated Platform.

During the first round of PPP, we worked with 100 lenders to process more than 250,000 loans totaling $34.5B in relief. At the height of the program, our platform processed three loans per second, or the equivalent of $230M/hour.

Our team has been hard at work since the IFRs were released to update our solution to accommodate these changes and ensure we’re still providing lenders with the most automation and the easiest borrower experience available. This same process is how we simplified Forgiveness to the point where 90 percent of borrowers completed their Forgiveness process through self-service.

We’ll be further breaking down these IFRs as well as how our platform will accommodate the new guidance to ensure an easy and efficient borrower experience, during our webinar today at 3pm EST.

This webinar is a part of our daily PPP Round 3 Prep and Launch Week Q&A series. You can register for the entire series, here.